3.1 R. Ishmael’s Rule No. 1, concerning a-fortiori argument, can be represented by a triangular star, at the center of which is the middle item (R) through which the three other items, P, Q, and S are related to each other. 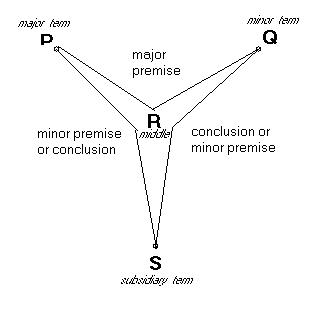 The a-fortiori argument may also be represented, with reference to the comparative propositions that underlie it, as ordering items P, Q, and S, according to their position in a common continuum R: 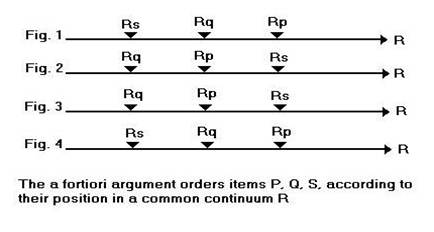 Note that the four figures of a-fortiori should not be confused with the four of syllogism they imply, which are, in the order shown: the fourth, third, first and second figures. 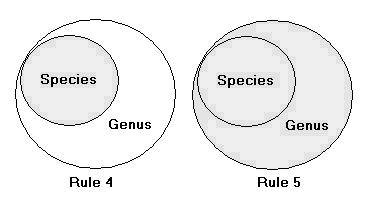 3.3 Rabbi Ishmael’s Rules Nos. 8-9-10, which are some of the Talmud’s harmonization rules, are all concerned with the following logical problem, formulated with reference to the following diagram: knowing the lateral relations between four items (the terms or theses, S1, P1, S2, P2, in the four premises a, b, c, d), what are the diagonal relations between them (i.e. the conclusions, e)? 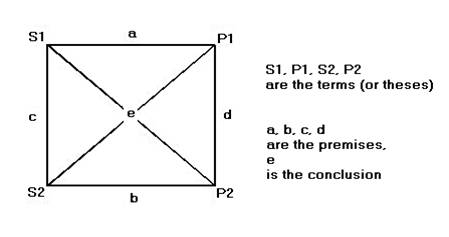 Such arguments appear much simpler, if viewed as successions of Aristotelian syllogisms (which involved three items, in two premises and one conclusion). They may then be graphically represented, using Euler diagrams. Their formally valid conclusions are then manifest for all to see; and the invalidity of some Rabbinic conclusions is then apparent.

3.4 We suggested a general formula for the first three (actually, four) of the hermeneutic principles which begin with the phrase kol davar shehayah bikhlal veyatsa…

The first three premises can be individually depicted as follows:

As for the remaining (predicatal) premise and the conclusion(s), we shall consider each case each in turn.

But first, let us consider what general conclusions can be drawn from the common premises of all such arguments.

Given the major and subjectal premises, we can at the outset, without resort to the other premises, make the following syllogistic inferences and graphic presentation: 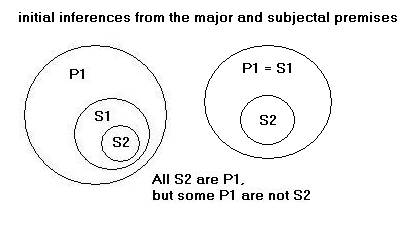 Note: I did not mention the above 3/OAO syllogism in my original treatment (Judaic Logic, p. 147).

It should, however, be pointed out that in the case of Rule 10, since the major premise is particularized in an effort to restore consistency, these initial inferences become annulled.

Similarly, given the minor and subjectal premises, we can at the outset, without resort to the other premises, make the following syllogistic inference and graphic presentation: 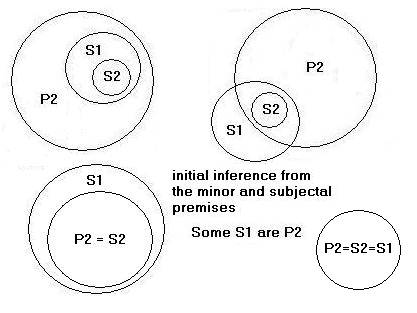 3.5 R. Ishmael’s Rule No. 8(a) – “lelamed oto hadavar” – the generalizing version of “lelamed”, may be depicted as follows, since its fourth premise is: 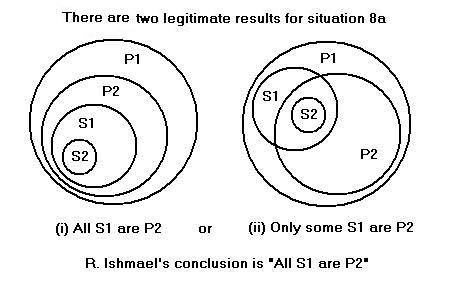 The four premises formally yield the conclusion “Some S1 are P2” (etc.), which is compatible with the two outcomes shown in our diagram.

Rabbi Ishmael concludes (more generally and more specifically) that “All S1 are P2”, which means that he at the outset generalizes the formal conclusion, and precludes the other formal alternative (some S1 are not P2). No reason is given for this hasty action. Thus, note well, although the Rabbinical conclusion is in this case compatible with the formal one, it is not identical with it. Strictly speaking, it is a non-sequitur. The best we can say for it is that it is a legitimate inductive preference to select the more general alternative; however, the Rabbis should remain open to occasional particularization of their conclusion, if it is found to lead to some contradiction elsewhere.

3.6 R. Ishmael’s Rule No. 8(b) – “lelamed hefekh hadavar” – the particularizing version of “lelamed”, may be depicted as follows, since its fourth premise is (note the reversal of order of the terms, in comparison to the preceding case):

All P1 are P2 (predicatal premise). 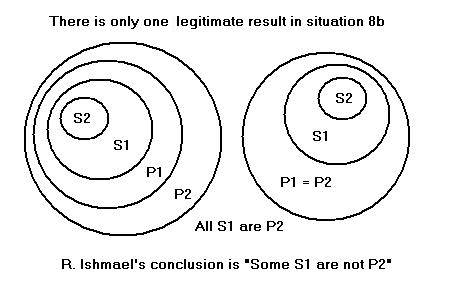 The four premises formally yield the conclusion “All S1 are P2” (etc.).

Yet R. Ishmael draws the very opposite conclusion “Some S1 are not P2”! Why this upside down logic? Apparently, he mentally considers the premises in conflict, due to some perceived redundancy in the text, and seeks to harmonize them by excluding all S1 other than S2 from being P2. But such particularization is logically illegitimate, since there was in fact no formal conflict between the premises, and textual repetitions can hardly be considered as such. Judge for yourself.

3.7 R. Ishmael’s Rule No. 10 – “shelo kheinyano” – is difficult to depict since it concerns a conflict resolution. Its fourth premise is:

As the following first diagram shows this premise is in conflict with the others, since if the circles representing P1 and P2 cannot overlap at all, then the circles S1 and S2 cannot satisfy all the given conditions regarding them. The problem can be faced in a number of ways:

(b) Alternatively, if S2 is wholly in S1, and S1 is wholly in P1, then S2 cannot be wholly in P2. We could accept this and propose that S2 is partly in P2, and partly in P1; but if we say so, we must also assume S2 is not entirely (but only partly) within S1.

(c) We might also resolve our dilemma by assuming S1 and S2 not to at all overlap, like P1 and P2. 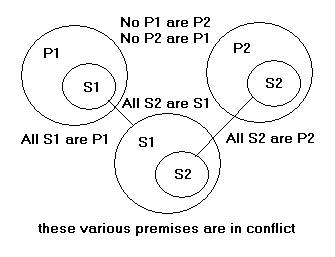 R. Ishmael’s preferred option, for resolving the conflict dealt with by Rule No. 10, seems to have been (a). That is, he kept the subjectal and predicatal premises, and even the minor premise, unchanged and chose to tinker only with the major premise, concluding: “Some, but not all, S1 are P1”. Diagrammatically, this Rabbinical resolution of the conflict looks as follows: 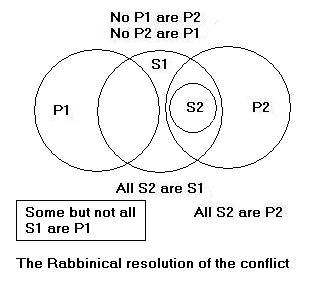 This is a formally acceptable option, even though not the only conceivable option. That is, though the Rabbinical response is not per se in error, it should be kept in mind by them that other inductive responses are possible if the need arise, i.e. if this response later prove undesirable for some reason.

This situation, where P1 and P2 only partly overlap, may be graphically represented as follows: 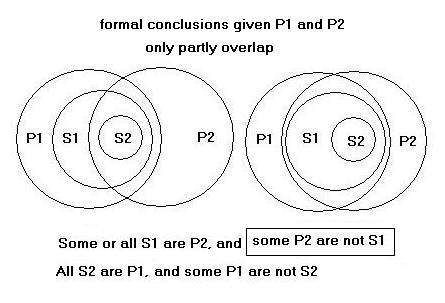 It is not clear (to me so far, at least) what R. Ishmael proposes to conclude in such cases.

3.9 R. Ishmael’s Rule No. 11 – “…lidon badavar hechadash” – can also to some extent be represented graphically. Do not refer in the present case to the earlier common premises and conclusions (for Rules 8-10) – this is an entirely different situation. Here, we are initially given the premises:

And we are told that an individual, say ‘x’, changes over time from membership in the class S1 to membership in the class S2. Whence, incidentally, by singular syllogism, x is initially P1 and later P2. Later still, x leaves S2 and returns to S1. Formally speaking, granting the given premises constant, there is no doubt as to the outcome of such return: x must again be P1. As to x’s relation to P2, it depends on further conditions; for we are not told in the way of a general premise whether P1 and P2 overlap or not.

These formal considerations are illustrated in the following diagram (assuming here, for the sake of argument, that P1 and P2 are mutually exclusive): 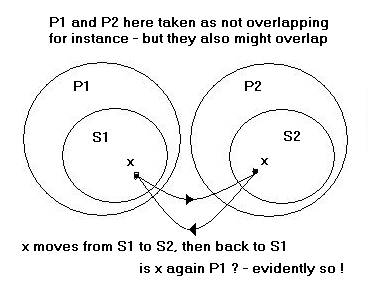 However, R. Ishmael conceives the possibility that when x returns from S2 to S1, the relation of S1 to P1 may in the meantime have changed to “Only some S1 are P1”, so that we can no longer syllogistically infer from x being S1 that x is P1.

Alternatively, the original premise “All S1 are P1” may have from the start been less general than apparent; that is, it may have more specifically been intended to refer to “All first-time members of S1”, so that we cannot be sure whether P1 applies “returnees to S1” like x.

Thus, the preceding diagram might conceivably be revised as follows: 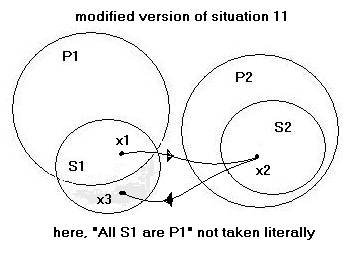 Anyhow, R. Ishmael considers the issue open, and recommends the matter be verified in the Biblical text.

3.10 R. Ishmael’s Rule No. 13, the last in his list, covers many different cases, most of which cannot readily be illustrated. However, the following diagram illustrates one example of the dialectic often involved, where thesis and antithesis are both narrowed, and replaced by their synthesis or common ground. 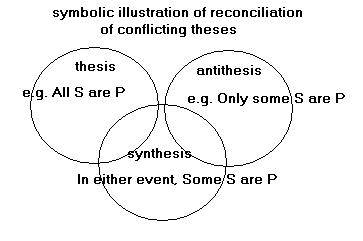 This illustration is symbolic, note well, because strictly speaking (in class logic) the propositions “All S are P” and “Only some S are P” should overlap – and their common ground, the indefinite “Some S are P”, would be their area of overlap.

This is just one example – the most ‘deductive’ – of how these conflicting theses might be reconciled. Other inductive possibilities would be to asymmetrically favor one or the other given theses – in which case, the selected one would constitute our synthesis.

In some (other) cases, too, it is possible to argue that the theses are not in as real a conflict as at first appears.

[1] Quite incidentally, I notice while writing this that in Future Logic (p. 37), I state that the mood 3/AAI is a derivative of 3/AII; but it could equally be derived from 3/IAI. Similarly, 3/EAO could be derived from either 3/EIO (as stated) or 3/OAO.