Our inquiry must now turn to a new doctrine, which may be called factorial analysis. This doctrine is to some extent an offshoot of that of opposition, and interesting for its own sake. Its essential value, however, is to prepare us for the investigation of modal induction, although some information of relevance to deduction is to be found in it. This doctrine is new, because modal logic involves a lot more forms than the traditional logic, and so an issue which was obvious and minor now looms large.

The various categorical propositions, A, E, I, O, and their modal counterparts, were presented as the building blocks or elements of knowledge. Elementary propositions are relatively abstract items of knowledge, which intersect in various combinations.

The conjunctions of two or more such elementary propositions, concerning the same subject and predicate, may be referred to as compounds. A compound is in a sense a unit of information too, although it is expressed by us as a sum of elements. Knowledge could conceivably have been constructed by giving each compound a distinct form, but then the elements of data they contain in common would have remained hidden. We wisely, even if instinctively, chose to limit the number of forms in our thoughts, and deal with compounds in terms of their constituent elements.

Not all elementary propositions may be conjoined, of course; some are incompatible, for example ‘A and O‘. Some conjunctions are redundant, as when a proposition is conjoined with another which is in any case implicit in it; for instance, A and I together mean no more than A alone. However, some compounds are significant, and our task will now be to identify these.

At any given stage in the development of knowledge we may have no or partial or complete information, concerning the relation between a specific subject and predicate pair. The sum of information available may be called a formula. A formula may consist of one or more elementary propositions. The elementary propositions taken individually may all be formulas, if they happen to summarize the state of knowledge at that point. Their combinations in distinct consistent compounds, summing up the known without redundancies, are also possible formulas.

Any information not included in a formula is to be considered unavailable in the context of knowledge; thus a formula must contain all known data concerning the two terms in question.

We will express compound formulas in the briefest way, e.g. ‘AIn‘ signifying ‘A and In‘, without use of extraneous words or symbols for conjunction; it being understood that propositions so fused concern the same subject and predicate, of course.

This study will concern itself only with plural propositions, although some comments about singulars will be made when useful. This is done for the sake of simplicity and clarity, but also in recognition that science is primarily interested in broad statements, and only incidentally in minutiae.

Within the closed system of actual propositions, that covered effectively by classical logic, only five formulas were conceivable: A, I, E, O, and IO. This in a sense resolves the issue of formulas with regard to extensional modality taken in isolation.

When the other types of modality are introduced, the issue becomes less obvious and more complex. The following table shows methodically what combinations, of the 20 elementary propositions (singulars ignored), can occur consistently and without redundancy. It results that there are a total of 195 distinct formulas, 20 of which are of course elementary, and the rest compounds of up to 4 propositions (75X2 + 79X3 + 21X4).

Note that compounds are expressed in their most compressed form (e.g. AI is included in A). In practise, we do not always compress compound statements; sometimes we prefer to stress an implication. For instances, ‘can never be’ stresses that ‘cannot be’ implies ‘is never’; ‘can sometimes be’ suggests a compound of ‘is sometimes’ and ‘can’.

Note in passing that if we considered either natural or temporal modality as a closed system, we would find ourselves in each case with a total of 49 formulas, 12 of which were elementaries, and the remaining 37 were compounds of up to 4 propositions. Formulas involving actual propositions only are 5 in number, and formulas which mix modality types number 102.

Now although this list of formulas is complete in itself, it will become apparent that it does not in fact exhaust the possible states of knowledge. We shall see that formulas of this kind are gross assertions, which do not clarify all the issues involved.

Once we view a compound as a unit, one complex proposition, we may ask what oppositional relations exist between compounds. Consider, for example, the affirmative compounds AIn, ApIn, ApI. They may be placed in a hierarchy relative to each other and to the cognate elements, as follows: 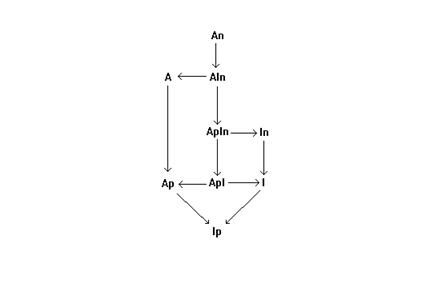 Looking at the arrows of subalternation, we see a gradual softening of position, ranging from An to Ip. There is a continuum of affirmative statements, in which temporal modality could also be inserted. A similar hierarchy may be developed for the analogous negatives. More complex, bipolar compounds also have their inter-oppositions, including many such subalternations.

The contradictory of any compound is a disjunctive proposition, note well; it disjoins the contradictories of the various elements involved, in an ‘and/or’ manner. Thus, for examples:

AIn is contradicted by ‘O and/or Ep‘,

ApIn is contradicted by ‘On and/or Ep‘,

ApI is contradicted by ‘On and/or E‘.

If AIn is false, then one of O or EpO or Ep must be true; each of the latter is by itself only contrary to AIn: it is the disjunction as a whole which is contradictory.

Similarly for all other compounds. Note that some ‘ands’ yield impossible combinations; these are as such automatically eliminated. For example: the contradictory of ApIOc is ‘On and/or E and/or At‘, in which any combination of On with At is rejectable at once, meaning that only the alternatives ‘On or EOn or E or AtE or At‘ are viable.

There is no need for us to work out all the interrelationships in advance. The work can be done ad hoc, as specific need arises.

Once we regard a compound proposition as a single whole in its own right, we are enticed to ask whether there are corresponding compound syllogisms. Consider, for example, the closed system of actuals. Here, we have one conjunctive formula, ‘I and O‘; its contradictory is ‘A or E‘, since not-{I and O} means notI and/or notO, which means E and O (= E) or I and A (= A) or E and A (impossible).

With regard to the conjunctive compound ‘I and O‘. Compound syllogism is impossible in the first figure, since we would need both an A and an E major premise with the same terms. It is also impossible in the second figure, since this figure only yields negative conclusions. However, in the third figure, we have the following valid double syllogism, merging 3/IAI and 3/OAO:

Some M are P and some M are not P,

therefore, Some S are P and some S are not P.

It must follow that the disjunctive compound ‘A or E‘ (which contradicts IO) also has a valid mood of the syllogism. It must be in the first figure, disjoining 1/AAA and 1/EAE, so that denial of its conclusion causes denial of its major premise, by reductio ad absurdum to the above one:

This shows that the compound IO, and its contradictory, have a deductive life of their own. These are the only Aristotelean syllogisms capable of processing compounds.

The same can be done with modal compounds. I will not go into detail but simply give a pair of examples:

Some M can be P and some M can not-be P,

and All M must be S,

therefore, Some S can be P and some S can not-be P.

and All S must be M,

therefore, All S must be P or No S can be P.

Other quantities and modalities than these can similarly be processed. The reader is encouraged to try and evolve a full list of compound syllogisms, as an exercise, with reference to the full list of compound propositions given earlier. Are there tandems involving triple or quadruple compounds?

To fully understand how any two terms, S and P, are related, we must know their relations in both directions: from S to P and from P to S. These may be called the front and reverse side of the overall relation. The S-P side alone can only provide us with a ‘flat’ picture of the intersection of the terms; the reality is ‘stereoscopic’, and to express it entirely we need to specify the P-S side as well.

The S to P and P to S relations may be called complementary. The possible complements of any S to P relation are the propositions compatible with its converse. Thus, the doctrine of complements is an offshoot of the doctrines of eduction and opposition.

Consider actual categoricals. Since ‘All/This/Some S are P’ are convertible to ‘Some P are S’ only, the possible complements of A, R, or I (in S-P), are A or O (in P-S). Since ‘No S is P’ is convertible fully to ‘No P is S’, the latter is the only possible complement of the former. Lastly, since G and O are not at all convertible, they are compatible with any of A, E, or IO, on the reverse side.

Note in passing that we could go a step further, and consider not only P-S relations as complements to S-P, but also relations involving the antitheses of one or both of the terms. In that case, obversion, obverted conversion, conversion by negation, contraposition, inversion, and obverted inversion, all become significant, telling us more about the possible combinations of S and P in all their facets.

To get deeper still, we would perhaps have to take transitives into consideration, looking into their possible conjunctions, as ‘supplements’, on the S-P and P-S sides, and indeed, on every other side.

However, all these complications will be ignored in this treatise.